Golden Gardens Park features a protected wildlife pond area. After taking all the photos of sleeping Mallards and turtles I could handle (a very slow day indeed), I set off toward my car, when I noticed a set of spider webs in the bushes to the right of the trail.

One was a perfectly circular web with its maker firmly in charge of proceedings at the center, the second web, still under construction, was partially anchored to the first web. At first I thought, hey, what a terrific arrangement and demonstration of cooperation for entrapping wayward insects.

Not, however, to the liking of the spider enthroned in the completed circular web, who mounted a series of ferocious forays to dislodge the interloper. I caught several rounds of conflict (including these shots), with the first spider capturing the most points, and often knocking the second spider off its branch.

ONE THAT GOT AWAY

In the moment it took for me to lower the camera to resurvey the immediate surroundings, a wasp swooped out of nowhere, plucking the first spider completely off its web (with legs now desperately splaying out in every direction–I felt I could almost see the shock in its eyes), and zipping away just inches above my head. The second spider had been left literally hanging by a thread, I’m guessing a bit groggy, thoroughly confused by the abrupt disappearance of its adversary.

Apparently the seemingly commanding position a spider enjoys at the center of an exposed web also makes it a sitting duck for hungry wasps.

Whether or not we choose “the right battle,” it’s probably good practice to have someone watching your back. 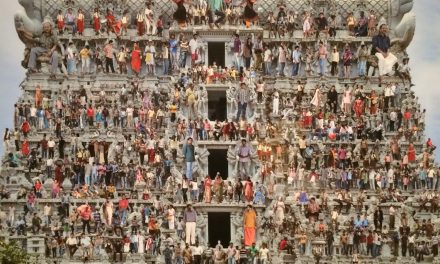